In collaboration with Tohoku University, Kozo Keikaku Engineering Inc. has developed "Relay-by-Smartphone®", a solution to secure the collection and transmission of information when communication infrastructure is not available. In this article, we asked Professor Hiroki Nishiyama of Tohoku University about the background of the birth of "Relay-by-Smartphone®", and his expectations for our company. We also asked Nishiura, from our company, to talk about our efforts for its implementation in our community as well as future prospects.

Having completed the doctoral program at the Graduate School of Information Sciences, Tohoku University in 2008, Dr. Nishiyama became an assistant professor and then an associate professor at the same graduate school, and since 2019 he has been a professor at the Graduate School of Engineering of the same university. He received numerous awards, including IEEE Communications Society Asia-Pacific Board Outstanding Young Researcher Award, 29th Special Prize, Grand Prize for Frontier Technology: Pave a New Way for Creativity, and Award for Science and Technology, The Commendation for Science and Technology by the Minister of Education in 2018.

“Background of the Birth of "Relay-by-Smartphone®"

In order to put the technology which I had studied purely as a theory into practical use, I had to overcome a huge barrier. At that time, any smartphone operating system (OS) required modification to enable ad hoc communication on smartphones. As a result, the first-generation prototype was created with necessary modifications to realize the communication between smartphones. Since the required modifications to OS would hinder the wide-spread use for the general public, the second-generation prototype was devised and developed to enable communication between smartphones by using only the standard functions installed on the smartphones.
Around that time, there was an encounter that encouraged the birth of "Relay-by-Smartphone®". A Kochi city officer in charge of disaster prevention against a tsunami hazard, which could be caused by the Nankai Trough earthquake, expressed a significant interest in our research as "a system that would enable communication during transmission disruption, when long-term flooding caused by the tsunami and land subsidence becomes a reality." I thought that the second-generation technology could fundamentally satisfy the needs of Kochi City, but felt "the university alone would hardly be able to complete a system that would be reliable under life-threatening circumstances at the time of actual disaster”. As a result, I consulted Kozo Keikaku Engineering Inc., which had been cooperating with our research on "Relay-by-Smartphone®" since the very beginning.

Further Evolution of the System

"Relay-by-Smartphone®" was put into practical use as "Kochi City Tsunami SOS App" in 2019, and has moved into other people’s hands. Currently, I am conducting theoretical research to further evolve the ad hoc communication technology that is the underlying basis of "Relay-by-Smartphone®". Since ad hoc communication is like a bucket brigade, its reliability to transmit data is questionable. Nevertheless, the current state of interest expressed by many local governments shows the imminent risk of natural disasters. In order to further improve the reliability of ad hoc communication between smartphones, I think it would be possible to connect it with vehicles and drones. In addition, we are also developing a technology to effectively utilize radio wave resources. If it is possible to change the  frequencies to use properly, "Relay-by-Smartphone®" could be used in evacuation shelters in a densely populated environment as well as for rescue teams moving around disaster areas.

Looking back on the joint research with Kozo Keikaku Engineering Inc., I feel that “researchers and engineers interacted well together”. In response to our queries such as "Can't you do this?", we received clear responses for example “yes we can, or no we can’t”, as well as accurate advice on how to achieve the result. Although the engineers of Kozo Keikaku Engineering Inc. are employed by the company, they do have a deep understanding of the mind and needs of university researchers, and communicated with us accordingly. Thanks to this, we could proceed with our research and development activities by realizing more functions than planned at each stage of development.

We, as researchers, like theoretical research and make a living out of it, and it provides great pleasure knowing that our research results are put into practical use and utilized in the world. We expect that Kozo Keikaku Engineering Inc. will connect researchers in various fields with the community to utilize their technology, as well as the people who use it.

- Our Commitment to Social Implementation of "Relay-by-Smartphone®" -

Mr. Nishiura joined Kozo Keikaku Engineering Inc. in April 2001, having completed a master's program at the Graduate School of Science and Technology, Kyoto Institute of Technology. He has been mainly engaged in prototype development and simulation analysis in the field of communication network research. After conducting research on cognitive wireless communication technology at Advanced Telecommunications Research Institute International (on temporary assignment), he has been involved in setting up "Relay-by-Smartphone®" operations since 2015. Currently, he is actively engaged in its social implementation.

We are committed to commercializing "Relay-by-Smartphone®" to “realize our vision to bridge universities, research institutes and the business world". In order to socially implement the knowledge of ad hoc communication by smartphones that Professor Nishiyama had accumulated, we needed to not only find technical breakthroughs, but also overcome some barriers. One of them was the UI (user interface). Since the users of "Relay-by-Smartphone®" are multi-generational, a user-friendly UI is required for people who are not familiar with smartphones. Taking a universal design into consideration, we have developed an UI called "Anpippi®" to pursue usability of the service. In addition, some marketing activities were also required to promote "Relay-by-Smartphone®" on various occasions other than the one with Kochi-City. Fortunately, in collaboration with our internal specialized team which had close ties with public organizations, we had an opportunity to link "Relay-by-Smartphone®" to the safety confirmation service (Q-ANPI) provided by the Quasi-Zenith Satellite System “Michibiki” run by the Cabinet Office. This led to a start of a series of demonstrative experiments by more than 30 local governments and private organizations in Japan, aiming at full-fledged implementation in the coming years.

Prospects for the Future

"Relay-by-Smartphone®" is a system that is rarely needed, but is destined to be used in harsh conditions when needed, where extremely high reliability is required. In order to ensure its reliability, we are trying to advance the sophistication of "Relay-by-Smartphone®" and also enhance the linkage with various technologies and systems. Following the link to the quasi-zenith satellite system that has already been realized, we are also considering a potential combination with TV broadcasting waves which are also resistant to disasters. Currently, we are pushing forward with such initiative as a communication infrastructure to secure information distribution in the event of a disaster, but in the future we would like to develop it as a part of social infrastructure that supports our everyday life.

So far, our relationship with Professor Nishiyama resembled our driving the social implementation of his research results. However, a new relationship is also emerging where Professor Nishiyama supports our project development from an academic perspective. We will continue to work with universities and research institutes for the social implementation of "Relay-by-Smartphone®" to build a safe and secure society without information interruption. 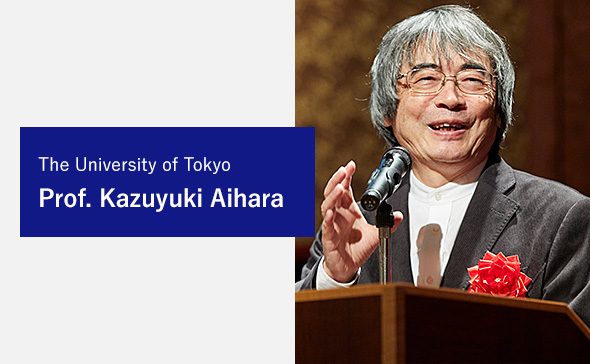 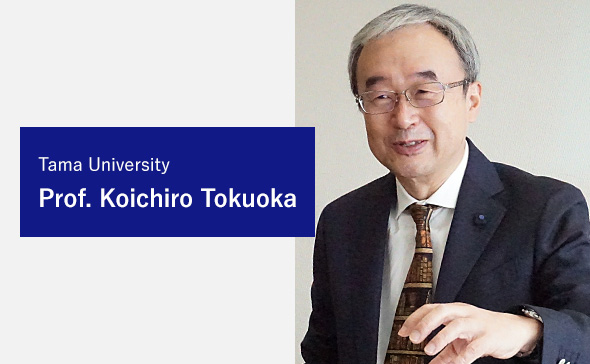 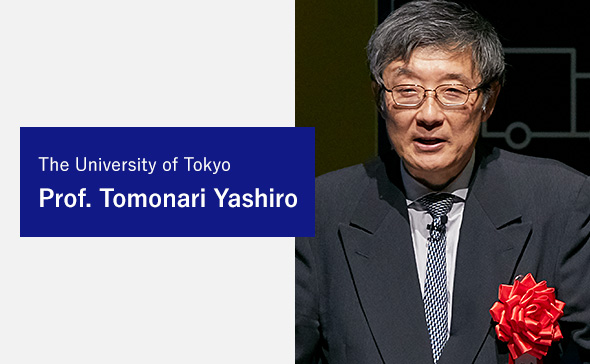